Up in the mountains

New perspectives for the Mariahilfer Strasse

A circle in the sea

Edit here your fullwidth slider
Project
Rozemaai, Belgium
Documentary
Down from the Mountains
Project
A circle in the sea
Podcast
Listening to Günther Vogt

At this time of the year the Mariahilfer Strasse in Vienna is one of the places to be. A few years ago B+B designers transformed the street into a pleasant yet chic pedestrian area, where the elegant honey locust trees are beautifully offset by the light-coloured paving, the wood and granite furniture exudes quality, and the lighting heightens the allure.

Recently OMA and Günther Vogt won a design competition for a department store and hotel that will make the street even more upmarket. With the addition of a green gallery and various roof gardens – including an orchard(!) – this part of the city will gain yet another attraction that fits into the historical street pattern, but which offers completely new views of the city from the roof terraces. We can’t wait…

In the fifth and last edition of the ’scape e-zine this year, you’ll find a podcast in which Vogt talks at length about his understanding of European landscape architecture. You could say that this e-zine reflects the European standard – in which contemporary renewal is undertaken carefully to fit in with the local setting.

An old modernist neighbourhood in Antwerp was refurbished using high-tech materials and by intensifying the greenness of the outside areas. And in Aarhus a circular piece of art connects the land with the water and the past with the future.

’Scape will be back next year with five more inspiring e-zines and a print edition packed with dossiers, portraits, essays and reviews.

And talking about New Year’s resolutions, have you already taken out a subscription? 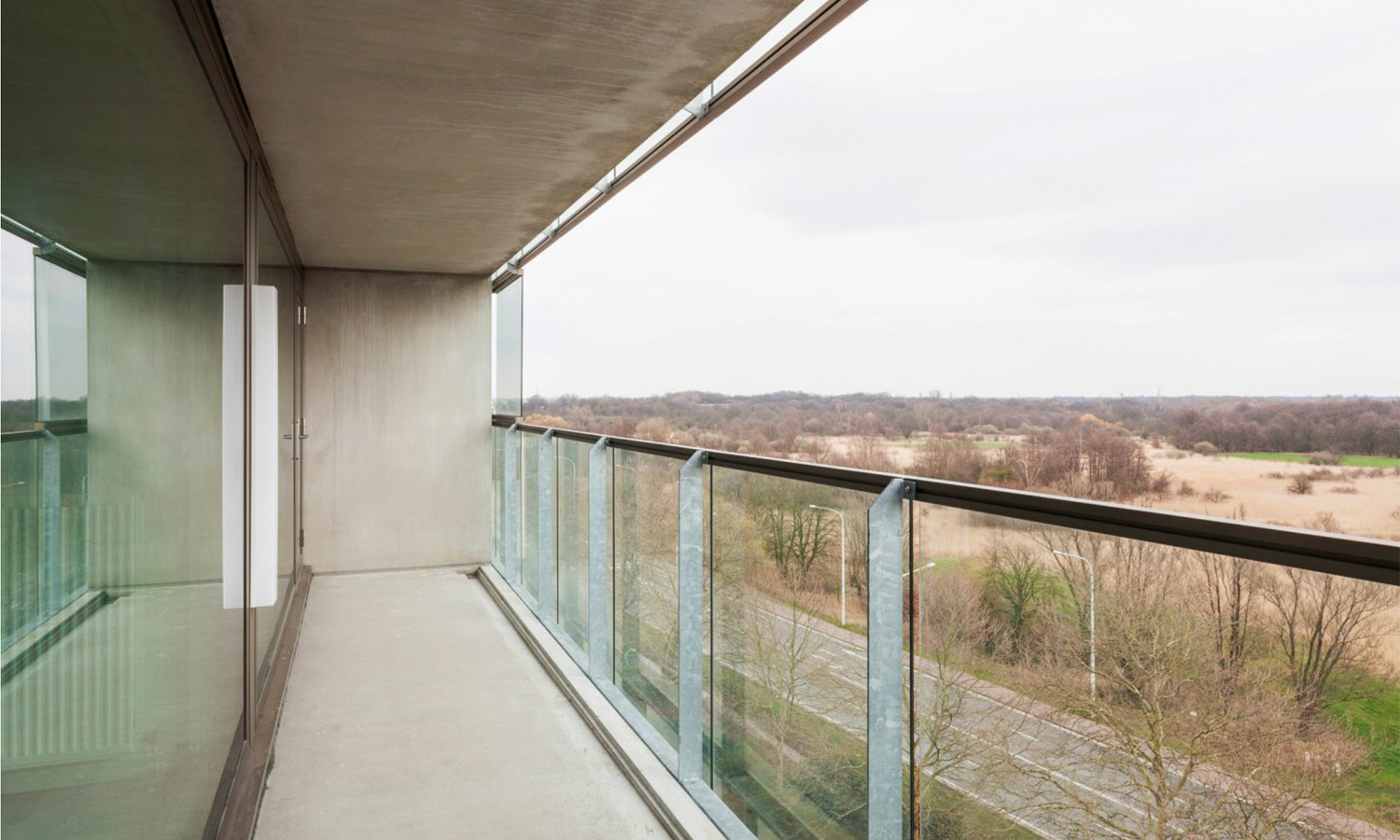 The outdoor space in Antwerp's suburb of Rozemaai is remarkably green. The Dutch landscape architecture firm Buro Lubbers made the design for the redevelopment, which has recently been completed. The stream – which had long ago been routed underground through a culvert – has been brought above ground and once again flows through the area. And the adjacent patch of woodland has been transformed into a park while retaining as much of its wild character as possible.

Buro Lubbers chose round beds and winding paths, turned the banks of the creek into natural drainage zones (alternating dry and wet), let the grass grow all the way up to the buildings, and allowed space between the cobbles in the parking spaces to create a greener effect in the street. These soft elements contrast strongly with the gridline street pattern and the 1970s high-rise flats.

This juxtaposition has in turn been accentuated by the attractive – and much needed – renovation of two of the apartment blocks, based on a design by Atelier Kempe Thill. This international Rotterdam-based firm is known for its bright, rhythmic designs and a strong feel for materials and colour. Atelier Kempe Thill is not in the business of hiding, preferring instead to prioritise simplicity and function.

During the renovation, the flats were stripped right down. But although parts were added to the sides and on top of the roofs, and the pebble-dashed concrete has disappeared behind glass casing, the rhythm of the facades remains. The typical square staircases were replaced, which allows more light to enter the buildings. Other improvements include the larger balconies, more feeling of space inside the flats and greater diversity in floor plans.

The entrances to each block have been made more visible by moving them – and the stairwells and lift shafts – to the front side of the buildings. The bronze-coloured anodised aluminium cladding and galvanised steel balustrades give the buildings a classy look. The flats have been insulated and existing material has been reused, making the renovation a success both financially as well as in terms of sustainability.

Project redevelopment of outside space in a

Commissioned by City of Antwerp

Photography Ulrich Schwarz and others 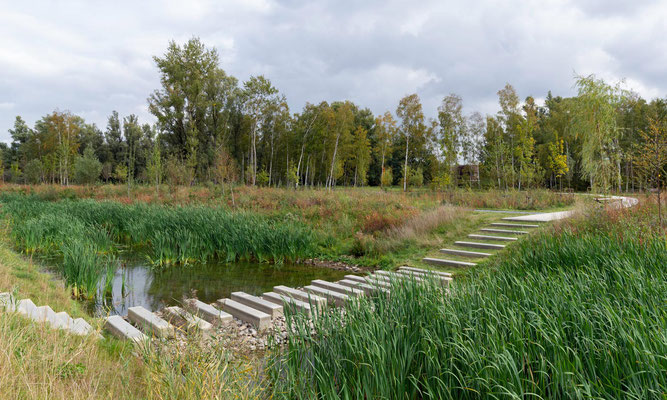 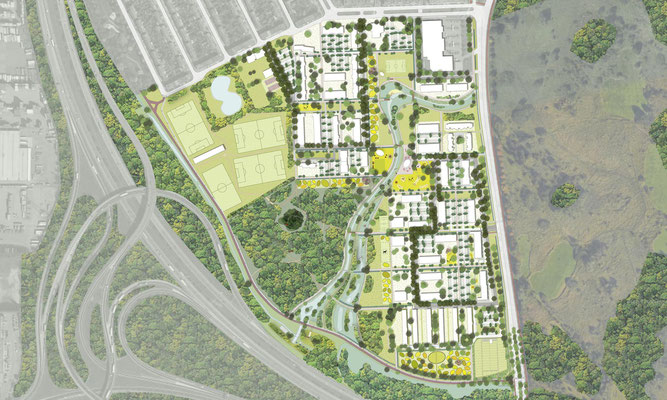 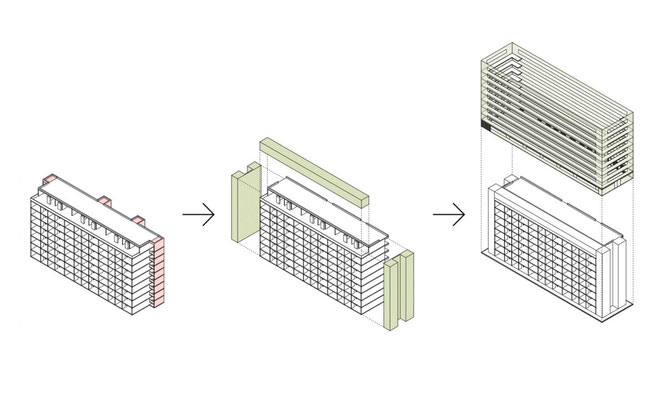 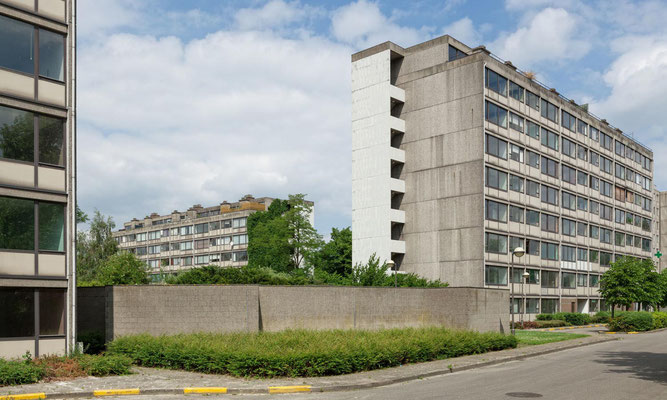 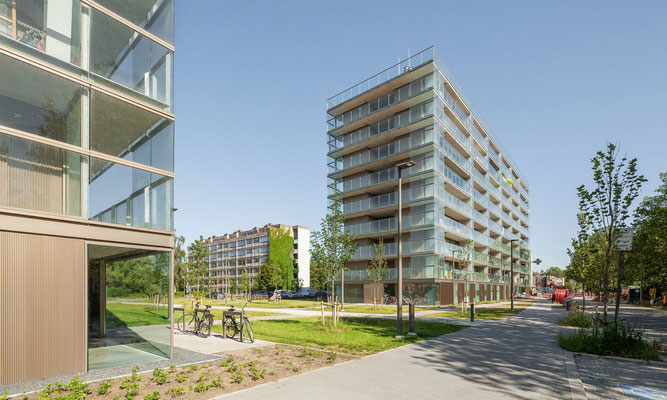 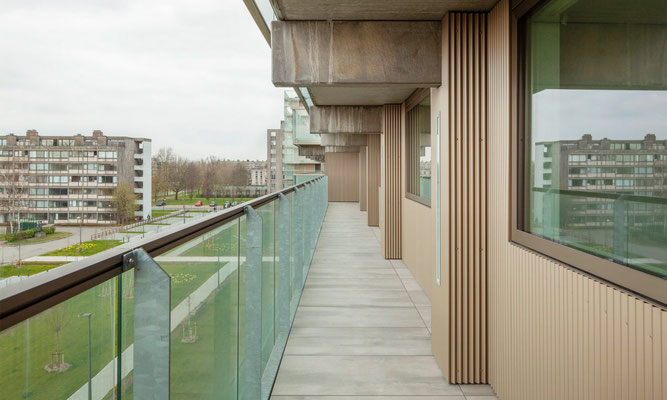 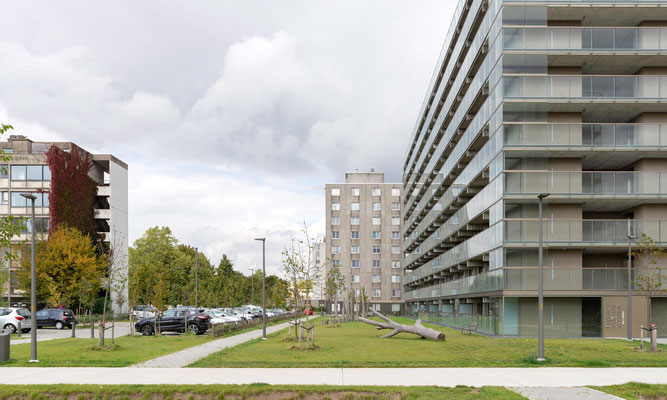 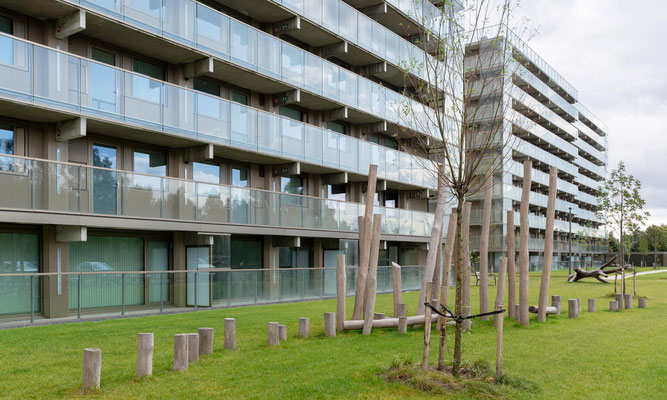 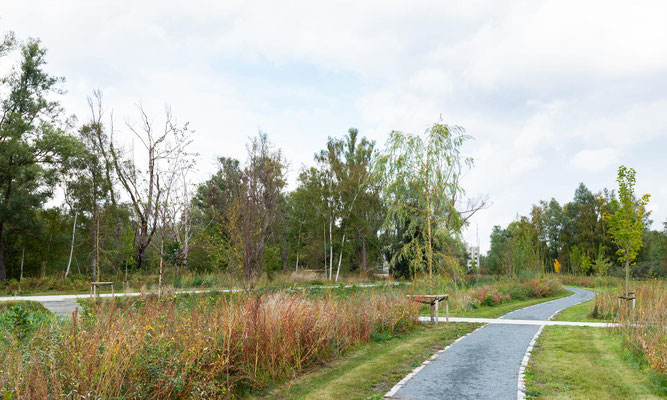 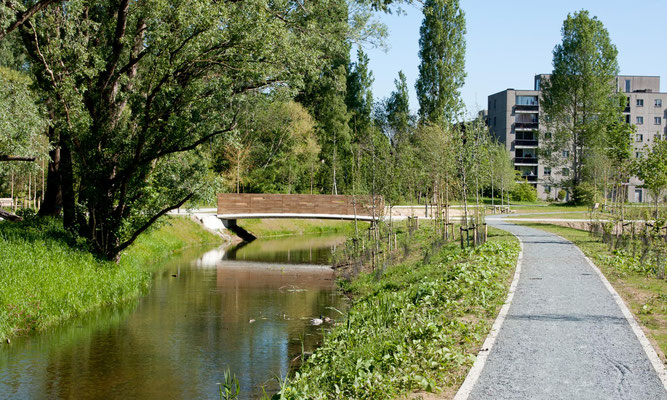 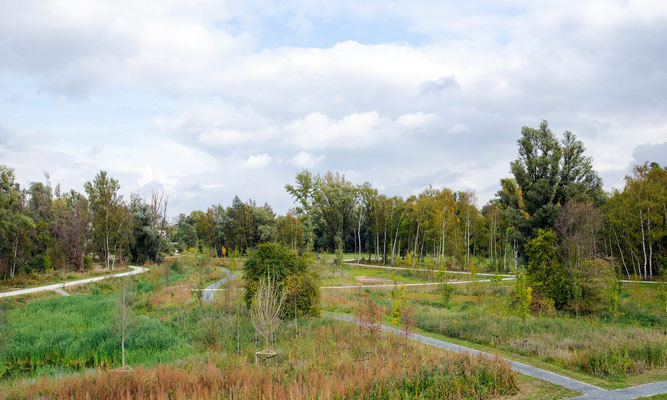 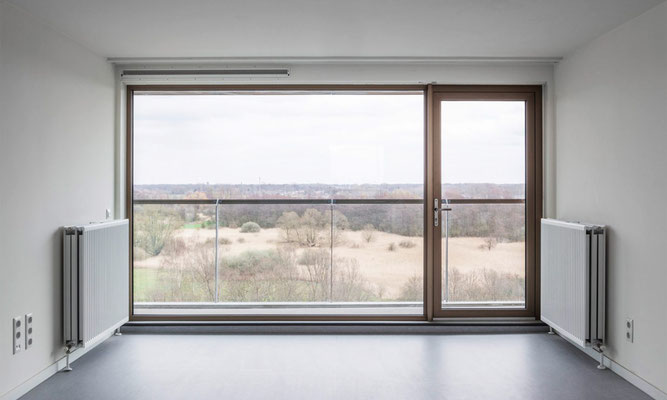 Short version of the film

up in the mountains

China’s economy is booming, but not everyone is benefiting from that. In the short documentary Down from the Mountains, Wang Ying (14) tries to manage alone with her sister Wang Bing (12) and their little brother Wang Jie now that their parents have left to work in the city of Huizhou. The family belong to the Yi-minority in the region of Liangshan in the south-west of China. In Huizhou the parents earn about 15 US dollars a day assembling headphones. The fact that they don’t speak Chinese makes it almost impossible for them to get a decent job. The children do the work on the farm in the mountains and try their best to look after each other. During the week they sleep in the school’s dormitory.

The photography is beautifully atmospheric, imparting an almost fairy-tale quality to the life of the three plucky children in their house in the misty mountains. Sadly, it also portrays the harsh reality of modern China. Wang Bing, Wang Ying and Wang Yie are not the only ones: the parents of nine million children in the Chinese countryside reside in the city because of work. The film illustrates the painful dilemma this creates: the money is needed so the children can attend school and have a better future, but in the meantime they are running wild – after all, they are children. All the mother can do is sigh ‘wouldn’t it be great if money didn’t exist’. The documentary was made by British journalist Max Duncan and won a World Press Photo prize in 2018.

Where boats arrived and departed

It’s one of those places that are so easy to miss. Not right on the route and you’re in a hurry. And it’s still quite a way to where you’re going. And you’re not quite sure exactly where is it. One of those places you once read about.

This one is about five kilometres south of Aarhus in Denmark, near Moesgaard Museum, about where the hills and forest begin. There’s an old country mansion in an old park, with an old car park and old trees. And a view out to sea. A place of long-gone entertainment. The hedge is majestic – typically Danish – wide and neatly clipped. Behind it, slightly higher, the white house in the romantic style so typical of a century ago. Neo-classical, the information board tells us: Varna Pavilion, built in 1909 as part of the Danish National Exhibition. A hotel and restaurant with a dancehall. But that’s not what we came for.

Lower down, beyond the trees, the hedge and the grass, in the water, lies the Infinite Bridge: a circular wooden boardwalk that juts out into the water, although ‘jut’ is not the right word to use for a circle. That’s the word that harks back to the old pier, from which boats used to leave for Aarhus and ports further away. A circle doesn’t jut out, but bisects everything, a shape unto itself, oblivious of its surroundings. Yet it fits perfectly here. A ring that connects the land with the water, encircling the large rocks that mark where the stream enters the sea.

To get to the circle you have to make your way down and through the sand. Modest in size,  it’s well worth the detour, for the continuously changing views: Aarhus in the distance; above you, the nearby pavilion, the garden, the woods. The water that opens up as you venture further out to sea. And then closes up again as you approach the land. It’s a circle that gets to you, sets you dreaming… on to further places.

The Infinite Bridge was created for an exhibition in 2015 by the young architects Johan Gjøde and Niels Povlsgaard. It proved so popular that the local council bought it and turned it into a permanent exhibit. Well, almost: in the winter it is dismantled and then reassembled each spring. In May 2020, when Varna Pavilion opens for its summer season, the circle will be on view again.

Swiss landscape architect Günther Vogt has earned his stripes with his designs such as those for the Eiffel Tower gardens, and the roof garden and the sunken courtyard of the New York Met. In 2014, his book Landscape as a Cabinet of Curiosities was published, in which he reflects on the separate elements of landscape and questions the importance of it as a whole. In his 2010 book Leidenschaftliche Landschaften (Passionate Landscapes) he analyses the influence of the internet on our perception of city parks and squares, and on their design. In this era of sensational digital imagery, how can one create spaces that are meaningful and sustainable in both a sociocultural and an ecological sense?

It is clear that Günther Vogt likes to ask questions to gain a better understanding of his field, but in the podcast recorded by Kingston University last November Louise Koopmanns and Andrew Clancy question him. The podcast is part of the series Register - Architecture & Landscape from Kingston University London.

The interview is about Vogt’s own development as a designer and his view of what will be expected of landscape architects in the future, in other words the challenges that lie ahead. Vogt comes across as very knowledgeable, for example on ecology and technology. However, simply visiting and ‘feeling’ places remains just as important to him – even dreaming is allowed. Hence, Koopmanns and Clancy’s description of Vogt’s designs as ‘contextual and surreal, robust and intimate’.

How can we deal with unpredictability in urban planning and design? What kinds of tools and techniques are needed. What shifts in thinking?

The theme is perhaps the most important building block in our discipline: beauty. What is it? What makes it so difficult to talk about? Why is it so elusive?

THE CITY AS OASIS by Thomas Sieverts

The encroachment of wild plants and animals into the urban landscape – reinterpreting and redesigning the city as a Noah’s Ark for biodiversity in a world of shrinking species numbers.

Architect Arna Mačkić, born in Yugoslavia, is partner in the Dutch based office Studio LA. Many of their projects are concerned with mechanisms of inclusion and exclusion, refugees, collective identity and the public domain.

Have you enjoyed this e-zine?

Are you curious to read the latest September issue…?

Subscribe now to receive 5 e-zines
and the print edition of ‘scape for €44.50

The paper edition of ’scape magazine is produced 2 times a year.